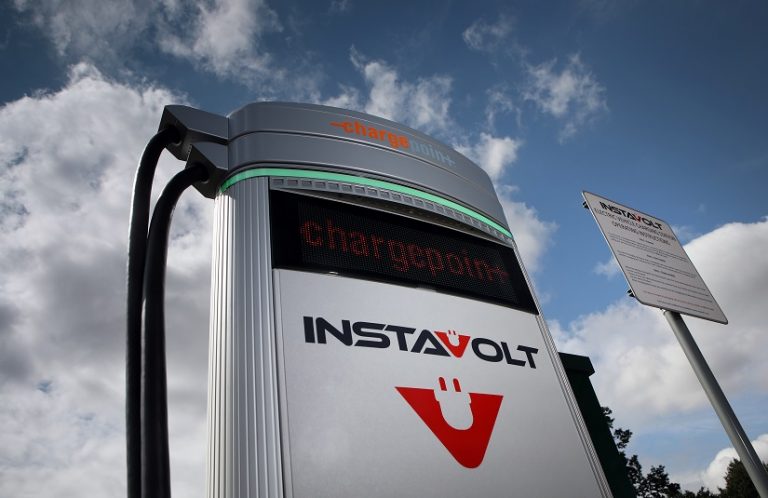 UK electric vehicle (EV) charging company InstaVolt is preparing for the rapid expansion of its industry-leading charge network as a result of growing demand for EVs and a collection of new and important corporate partners.

InstaVolt has so far raised £68 million, including an initial £35 million in equity from the UK Treasury’s Charging Infrastructure Investment Fund (CIIF), which is managed by Zouk Capital and recently reached a third close of £380 million.

For the future, InstaVolt expects to invest heavily in the UK charging sector witg plans to double its corporate partner network every 10 months.

InstaVolt is led by founder and Chairman Adrian Pike, CEO Adrian Keen, CTO Gary Kirkland – who all worked together back at Anesco – and CFO Chris Bott.

Clean Energy Pipeline recently spoke with Pike in a follow-up to our May 2017 interview with former CEO Tim Payne.

InstaVolt installs its units, which are open 24/7 and available under a pay-as-you-go model, at public locations rather than in the homes of EV owners as a means to address range anxiety from EV owners and accelerate the adoption of EVs.

It was the first network to introduce contactless payment, something that the Government has since insisted becomes the standard for public DC charging.

Depending on the size of the location and demand of the region, InstaVolt will install between two and eight chargers per site, with the site secured to a 20-year lease and the grid connection owned by InstaVolt.

“We’re about contactless and not being in a club; where people can plug their car in and then grab a coffee, WiFi, something to eat,” Pike elaborated.

InstaVolt typically sources its charger technology from ChargePoint Inc and is currently the US company’s biggest customer in Europe. However, InstaVolt has also recently completed its first order with Chinese company BYD Co. Ltd. that, when fulfilled in April, will also mark the first time a BYD charger has been imported into Europe.

The company installs new chargers, or adds to existing locations across the country, every week and is consistently securing new corporate partners like Costa Coffee, KFC, or Starbucks franchisees, to house its chargers.

Beyond the food service industry, InstaVolt has also found success with gyms, including Bannatyne Health Clubs, supermarkets, such as Booths in the Lake District, and local councils, like Mid Devon County Council.

Although these have been important partners to InstaVolt, it’s another new partner that sees the company getting bullish.

A recently signed exclusivity agreement with fast food chain McDonald’s will provide InstaVolt with access to approximately 1,200 new locations across the UK.

InstaVolt is targeting 5,000 installed chargers by 2024/25, in conjunction with the UK Governments aims to be zero emissions from the tailpipe by 2035, but will continue to assess locations and may increase its goal if the EV market continues to rapidly mature.

The greatest benefit of its agreement with McDonald’s, Pike declares: “[They] have done all their homework on the best locations. They’re on the road, easy access, and they have rebranded. It’s not greasy burgers anymore, they’re big on healthy options and on their coffee. Sustainability is high on their agenda and they demonstrate that commitment. Their whole environment is different.”

InstaVolt recorded its biggest charging month in the company’s history just before the pandemic hit the UK in December 2019. Once the pandemic arrived, InstaVolt actually began to notice an ‘exponential’ increase in charger demand out in the country, caused by a greater amount of internal travel over the holidays.

For instance, InstaVolt’s chargers at Booths supermarkets across the Lake District, which had average utilisation levels prior to the pandemic, suddenly had scores of EVs queuing up to plug in.

“I think our growth of chargers is growing ahead of the growth of EVs,” detailed Pike on InstaVolt’s experience during the pandemic.

“We’re growing, even through lockdown, between 15 and 20% per month in revenue and utilisation.”

At the same time, a wider base of manufacturers are now producing electric vehicles and the secondary EV market is beginning to pick up, a factor Pike says is important to the overall growth of EVs and the phase out of fossil fuel vehicles.

The result, Pike believes, has been a greater social and governmental consciousness surrounding the environment and EVs.

“I think the pandemic has made people think about the environment,” Pike declared.

“I actually don’t think the government would have moved the ban on fossil fuels vehicles forward if not for the pandemic.”

For Pike, the pandemic seems to have caused irreversible changes in how humans travel. The question then, is whether or not InstaVolt can continue to lead that transformation.

In addition to InstaVolt, Pike serves as the Chairman of UAE-based solar project developer Enviromena, which has historically focused on the Middle East and North Africa, but has recently launched an expansion into Europe, with 19 projects currently being developed in Italy and 11 in the UK.

Just a few weeks ago, Enviromena reached commercial operation on a 257 MW solar power plant in Jordan for Masdar, the company’s second COD in two years.

On top of that transaction, Enviromena and Blackfinch entered exclusivity on two UK solar farms, with a total installed capacity of 40 MW in Hampshire and Dorset and construction also commencing in 2021.

In regards to the company’s European expansion, Enviromena has hired a raft of new executives over the last year to lead its growth and has opened new branch offices in the UK and Rome.

Looking forward, Enviromena is planning to install 300MW of clean energy capacity during 2021/22 and build its future pipeline across Europe, with at least 500 MW in the UK over the next two to three years.

A man with many titles, Pike is also the Chairman of the Board for HS Orka, the second-largest geothermal power producer and the largest privately-owned power producer in Iceland.

Pike joined HS Orka in the summer of 2020 and has yet to spend time with the company in person. His experience with the geothermal power producer is representative of a wider shift in corporate culture that Pike believes to be permanent.

Prior to the lockdowns, executives regularly travelled to conduct business in person; but now, corporates are compelled to embrace a digital business structure that actually reduces emissions and cuts down on business expenses. Depending on the industry, some corporates have even moved to offload office space and transition to a fully digital platform.

Returning specifically to HS Orka, the company’s flagship asset is the Reykjanesvirkjun geothermal plant. First opening in 2006, the facility has an installed capacity of 100 MW, but is currently undergoing an expansion to add another 30 MW of geothermal capacity to the plant, with construction expected to finish in 2023.

Despite the company’s base in geothermal power, HS Orka is also assessing the potential for green hydrogen and vertical farming projects that will support a green transition and efficiently utilise Iceland’s limited space and resources.